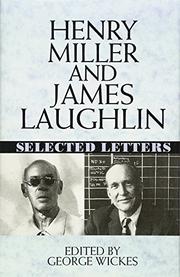 The fifth in the series of correspondence between avant-garde New Directions publisher Laughlin and his authors presents a slightly less intimate relationship (and less interesting Miller) but serves to chronicle one facet of Miller's anarchic career. In 1935, when he was still an undergraduate at Harvard and prepared to publish ultramodern writers rather than go into his Pittsburgh family's steel business, Laughlin wrote to the middle-aged author of the banned Tropic of Cancer. The ensuing 44-year correspondence (including others at New Directions, such as the later editor-in-chief Robert MacGregor), brings out unusual personal qualities on both sides. Miller is both comparatively restrained and brief, even in his enthusing suggestion of publishing Siddhartha (which became a New Directions bestseller in the '60s) and his laconic account of his parents' deaths. He also shows the familiar authorial discontent with distribution, sales, promotion, and royalties. The parsimonious Laughlin proves generous in the early years, giving frequent loans and advances, and finally settling on a monthly semisalary for the financially maladroit Miller in lieu of standard royalty payments. Loyally keeping Miller in print, New Directions emerges as cautious but canny, notably during the ban on his notorious books, when they concocted a Henry Miller Reader of permissible material from his works. Editor Wickes (English/Univ. of Oregon; ed., Miller's Letters to Emil, 1989, not reviewed, etc.) supplies a functional introduction, but his notes fluctuate between incomplete and obvious. Although Miller's earlier correspondence was more vital and lusty and his dealing with Grove more controversial, his slightly prickly but perdurable relationship with New Directions spanned both a radical career and a transformation in publishing and literature, as evidenced here.