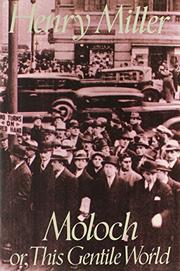 MOLOCH, or THIS GENTILE WORLD

Miller's lost first complete novel, which—along with the unfinished Crazy Cock (1991) that followed— was unearthed in 1988. In her introduction, Mary V. Dearborn tells us: "Moloch is intriguing as a piece of Miller juvenilia and as a first attempt at autobiographical fiction....But its prose is spotty and uneven, almost uniformly stilted and awkward, and the narrative voice is inconsistent and frequently obtrusive." The caveats made, this is still a pretty awful book by a wonderfully original writer finding his voice. Nobody in America in 1927 was writing even remotely like Miller does in Moloch, a novel that refuses to cut back on its vaulting ambition or to sweeten its sights with kindnesses to anyone. He writes in the third person about his days as a personnel manager for Western Union, called here The Great American Telegraph Company, and in Tropic of Capricorn The Cosmodemonic Telegraph Company. These office scenes are a run-through for the full frenetically unbuttoned experience in Capricorn, but their humor is mildly sardonic and laced with ethnic slurs appropriate to the characters. The sex here, mild by Miller's later standards, was unquestionably outspoken for its day when no man ever touched a woman's breast in fiction. Meanwhile, despite its gargantuan flaws and thick prose, something striking arises on every page, gleaming like turquoise shards in an empty lot. The story, such as it is, more or less focuses on Dion Moloch's job, his associates, and his playing flee and loose while wife Blanche and daughter Edda wait at home. Then Moloch comes to terms with Blanche, after she leaves him. A period piece, often boring, filled with likable grotesques and gritty street-sights in Manhattan and Brooklyn.