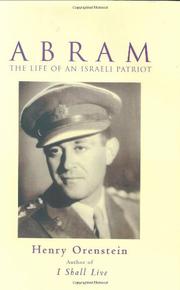 The Life of an Israeli Patriot

Abram Silberstein led a remarkable life in the turbulent 1940s, but his biographer and friend uses this book as an excuse to glibly recap the history of WWII and the rise of Israel. Except for a moment when both were boys in Poland, the author only knew Silberstein after the war. While he and Abram lost their families in the Holocaust, Orenstein did not share Abram’s active life on the front lines of history as a teenage immigrant to Palestine, a volunteer in the British army, a daring commando fighting the Nazis in North Africa, a smuggler of concentration camp inmates into Palestine, or as the transportation specialist who broke the Arab siege of Jerusalem. And while this may sound nonetheless as though it would have to be the lively memoir of an extraordinary subject, Orenstein perversely sticks Abram in the background—in order to saturate the bulk of his pages with his own views of the major events and battles of the second half of this century. Orenstein, author of the Holocaust memoir I Shall Live (1987), is capable of writing simply and effectively, but most readers will undoubtedly prefer to look elsewhere for well-known highlights of the careers of Rommel, Mussolini, Hitler, and Churchill. Abram the die-hard Zionist is duly outraged at the “American Army’s Jewish officers— lack of interest in what he and other Palestinian Jews were fighting so hard to accomplish.” The book well describes the danger for Palestinian Jews of a German takeover of Egypt; also useful is Orenstein’s willingness to reassess the Zionist icon David Ben- Gurion. Abram opposed Ben-Gurion’s suicidal attack of Jordanian-held Latrun, which blockaded Jerusalem. After criticizing the future Israeli prime minister to his face, Abram helped to create the “Burma Road,” which saved Jerusalem from starvation. The brief tale of an interesting life couched in long stretches of irrelevancies.