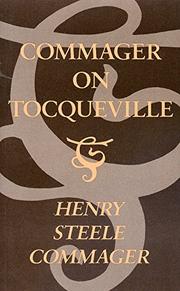 In an eloquent and insightful search for portents and counsel for modern America, the distinguished historian (Emeritus/Amherst; Empire of Reason, 1977, etc.) revisits the classic Democracy in America by Alexis de Tocqueville (1805-59). After putting Tocqueville's work in historical perspective, Commager explores five issues that the Frenchman raised: his warning about the tyranny of majorities; the costs of a just society; the impact of centralization on democracy; the role of the military in a democracy; and the contradictions between political equality and economic inequality. While Commager concludes that, with sporadic exceptions, the tyrannies foretold by Tocqueville did not occur, he sees the bloated federal bureaucracies, massive military-industrial complex, and pervasive economic inequalities of our society as possibly fulfilling those darker prophecies. Commager considers modern America as having lost its founders' faith in posterity, with nuclear and environmental policies that pose threats to the continued existence of the species; and while he doesn't view centralization of government with the same horror as did Tocqueville, he recognizes its dangers. Asserting that many of the perils that Tocqueville feared have come true in Europe, Commager contends that ``Tocqueville was prophetic in the warnings he addressed to the nations of Europe. It is possible that he may prove justified...in the warnings he addressed to the American people.'' Turning to the seemingly intractable problems of the modern age—overpopulation, exhaustion of natural resources, and pollution, among others—Commager departs from a discussion of Tocqueville as he argues that—since these problems are global in scope and amenable to technological solution—the national and ideological verities of the past may be outmoded. He calls for a new vision of American leadership that transcends nationalism and that seeks to conserve world resources and preserve global unity. Often lugubrious and polemical but consistently wise, sobering, and profound.