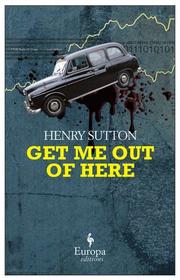 GET ME OUT OF HERE

The latest creation from Sutton (Thong Nation, 2006, etc.) is a mad man in a mad world, obsessed with brand names and luxury but furious with cheap materialism and shallowness of life in London as the credit crisis of 2008 unfolds.

When he isn’t wooing women who want nothing to do with him, Matt harangues retail clerks and managers as he attempts to return shoes, luggage, designer eyewear and other ill-advised purchases that he goes from fervently desiring to deeming faulty. He’s having cash-flow problems which he attempts to remedy by offering friends and family further “investment opportunities” in a murky business scheme he’s hatching with the North Koreans. Dumped by yet another girlfriend, Matt turns from disturbed to unhinged—his rambling internal rant follows increasingly sinister misadventures punctuated by ominous gaps in which the women he encounters, spies on and stalks disappear. Consumed with ire with others’ excess and jealousy over their seemingly endless credit, while he, broke and bashed-up by violent incidents that are never fully elucidated is forced to cadge free meals from the friends and associates he compulsively mistreats and to steal cheap wine, he spirals downward into a paranoid, self-destructive loop. His narrative becomes elliptical and contradictory, rife with nonsensical digressions and digressions within digressions, usually on his purchase history and feelings on design, style and the lack of integrity in name-brand products. Very little happens, although there is a sort of progress to his decay. An image, contradictory to his deluded self-image and fantasy-life, begins to emerge from glimpses of his reflection and others’ shock and disgust at his increasingly bruised and scratched face, his wonky glasses and disheveled demeanor. Meant to be a satire, what little humor there is in his absurd turns of mind and in the juxtaposition of his delusional rants and pathetic reality soon wears thin, with little support from the weak plot and meandering language. But are Matt’s murderous thoughts just thoughts?

For readers with a high enough threshold for meandering diatribes to make it to the end, answers to certain questions—e.g., what’s actually going on with Matt? will he ever manage to escape to North Korea?—aren’t much of a reward, given the larger question posed by a lack of story, entertainment or meaning: Who cares?