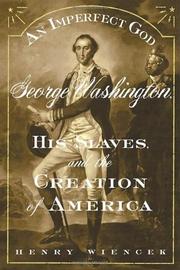 George Washington, His Slaves, and the Creation of America

The term “Founding Father” is no metaphor, this account of Washington’s life and times instructs us.

Magazine writer and pop historian Wiencek takes the project begun with The Hairstons: An American Family in Black and White (1999) a step further in time. Documenting the complex role of slavery in the late colonial and early republican period, Wiencek charts George Washington’s feelings about the subject, which evolved beyond the slave-trading days of his youth into an attitude not unheard-of in Virginia, but certainly unusual: the conviction “that nothing but the rooting out of slavery can perpetuate the existence of our union.” The change of heart, Wiencek suggests, had several origins. One was the valiant service of slaves and black freemen in the Revolutionary War; when a group of Virginia slaves revolted 20 years afterward and were condemned to be executed, one nobly said, “I have nothing more to offer than what General Washington would have had to offer, had he been taken by the British and put to trial. I have adventured my life in endeavoring to obtain the liberty of my countrymen, and am a willing sacrifice in their cause.” A more personal cause may have been that Washington fathered children by slave women at Mount Vernon; Wiencek offers circumstantial but compelling evidence that the family of West Ford descended directly from Washington, and Ford had the unusual distinction of having been a landowner and the second wealthiest free black in Fairfax County at the dawn of the Civil War. Whatever the ultimate reason, Washington stipulated in his will that his slaves be emancipated and, Wiencek says, apparently regretted that he had done nothing to free them while he was in office, when “the effect might have been profound” had Washington set a precedent that the chief executive could not be a slaveholder.

A capable, decidedly revisionist work of history, coinciding with Garry Wills’s “Negro President” (below) and other latter-day considerations of slavery.