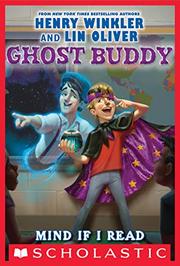 MIND IF I READ YOUR MIND?

From the Ghost Buddy series, volume 2

A sixth-grader and his live-in ghost further cement their friendship while bootstrapping each other toward better social skills in this airy sequel to Zero to Hero (2012).

This time the ghost takes center stage. Dead teen and compulsive prankster Hoover “the Hoove” Porterhouse has but one last chance to earn a passing mark from Higher-Ups in Helping Others and Responsibility to be set free to realize his life- (and death-) long dream of visiting every Major League ballpark in the country. When an upcoming school assignment that requires showing some personal skill sends his shy, breathing buddy Billy Broccoli into a terrified tizzy, the Hoove’s “help” with a fake mind-reading act boosts Billy’s public status from outsider to awesome. Carrying its messages lightly, the tale ultimately leaves the Hoove with better impulse control even as it moves Billy to twin realizations that cheating is neither good for building self-respect nor the best way to make friends. Highlights include a pair of misty Field of Dreams–style exchanges with the one-and-only Yogi “You can observe a lot by watching” Berra. The cast is thoroughly likable (even the requisite bully will earn reader sympathy, if only for being so gormless).

A go-down-easy book that provides both lightweight character building and several comical turns.