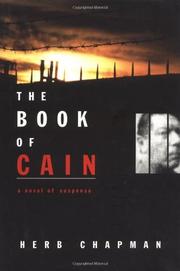 THE BOOK OF CAIN

Strong debut thriller by a former member of the justice system in New York, featuring a standoff between FBI profiler John Keenan and Isaac Drum, the serial killer he captured after a rigorous manhunt. Eight years pass and Drum is now awaiting execution—but somehow he has slipped a letter out of prison, threatening the life of Zack, the son of a Marianne Paxton, the widow of a warmhearted policeman Drum has already murdered. Does Drum really have some monstrous co-murdering nut on the outside who will carry out this threat if the wily killer is electrocuted? As it happens, Keenan himself feels he has monstrous personality flaws only heightened by his job. Steadily gripping and well done.