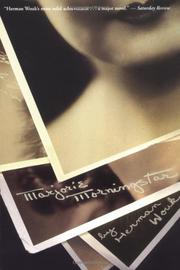 As different from The Caine Mutiny as that was from Aurora Dawn- this should tap a wholly different vein. It is the kind of book women- Just past the age of illusion- will read with absorbed interest, occasional ironic recognition, and ultimate critical detachment. But- despite the ease with which the story can be criticized, it will be read. For Herman Wouk has gone behind the scene, the patina of the apparently smug, self-satisfied, successful matron, to the girl she was, starry-eyed about life and love and her own particular genius...Marjorie Morningstar, at seventeen, was sampling the sweetness and the bitterness of life in her parents' newly acquired residence- Central Park West, a far cry, she hoped, from the Bronx where she had been brought up. She and her mother were straining her father's resources to the limit, but Margie must meet the right boys. She was beautiful, reasonably intelligent, had her eye fixed on theatre as a goal (her stage name to be Marjorie Morningstar) — and was willint to ride roughshod over parental restrictions to get there. But religious taboos were ingrained; the cult of respectability was another part of her being. And this- her story- follows a career of near success, recurrent setbacks, gingerly savored temptations, and an obsession about one man, calling himself Noel Airman, glib talker, professional wolf, unstable dabbler in the arts, that nearly wrecked her life. Noel taunted her with the reality of her true ambition- a home in the suburbs, a husband with a regular paycheck, a recognized position as a respectable matron. And Marjorie tried- through the years- to prove him wrong, while striving to remake him in an image he refused to accept. There's so much that is sound and right and moving in the story that it may be quibbling to say it is overlong; that some of the situations are too pat; that some of the characters- Noel himself, and another admirer, Mike Eden- are too often used as oracles, airing their somewhat battered views of life; that the finale seems contrived to tie up the loose ends to everyone's satisfaction. For all these things are true- and yet it remains as an extraordinarily successful portrait of someone who is every woman, at some point or other. And for the major part of the novel, it is holding reading. Primarily a woman's book, although it may open the doors to some men's understanding and sympathy.