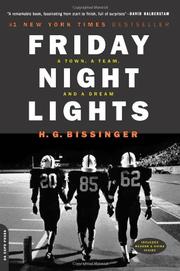 FRIDAY NIGHT LIGHTS: A Town, a Team, and a Dream

An appalling but altogether engrossing appreciation of why high-school football is not just a game in one all-too-typical Texas city. A Pulitzer Prize-winning reporter for the Philadelphia Inquirer, Bissinger took a year's leave of absence to settle in Odessa, a down-at-the-heel oil town (population ca. 100,000) in the western part of the Lone Star State. While the municipality's economic fortunes wax and wane with those of the energy industry, its heart is ever true to the Permian Panthers, one of America's premier high-school football teams. Since 1964, Permian has won five state championships and made the playoffs 17 times. Few of the overachieving teen-agers who compiled these records, however, have gone to to college, let alone professional, gridiron careers, and many have suffered debilitating injuries as well as psychological traumas on the hard road to short-lived glory. Bissinger offers a tellingly detailed account of Permian's 1988 season, which extended from August through mid-December, when the squad lost a semifinal title contest by one point. Letting the facts speak largely for themselves, he documents how community pressures force educators to turn a blind eye to the means used to keep youthful athletes eligible to compete on Friday nights throughout the fall and early winter. The author also shows the insidious ways in which the tradition of autumnal madness affects students, their parents, elected officials, and the local populace as well as teachers. In brief, he demonstrates, to say that Odessa--with its pep rallies, motorcades, wildly cheering crowds at a stadium that seats 20,000, and insistence on nothing less than total victory--overemphasizes the so-called sport of high-school football is vastly to understate the case. A sorry tale, well told, of a fearful misallocation of resources, human and otherwise.