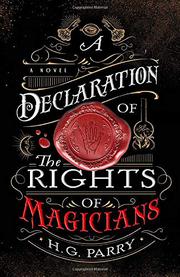 A DECLARATION OF THE RIGHTS OF MAGICIANS

From the The Shadow Histories series, volume 1

An alternate history in the style of Naomi Novik and Susanna Clarke explores the French and Haitian revolutions with a magical twist.

This series opener has three plotlines. One follows Fina, a young enslaved woman who eventually joins with Toussaint Louverture and plays a pivotal role in the revolution against slavery and French rule in Saint-Domingue; the second follows Camille Desmoulins and Maximilien Robespierre as they stir up the bloody Reign of Terror; and the third follows friends William Pitt and William Wilberforce as they rise in the ranks of the British Parliament. Parry is working with historical events and (mostly) real characters here, but this is a world where some people are born with magical abilities. Some can control the weather, some can manipulate metal, some can even control others through “mesmerism.” Some magicians have abilities that are wholly outlawed, like necromancy, and “vampires”—here meaning human magicians who can ingest blood to give themselves eternal life—have been wiped out altogether (supposedly). But who is allowed to use their magic? Only White aristocrats, of course, and with the aid of magic, White slave owners literally control slaves’ every movement, trapping them inside their minds. But enslaved people, like Fina, are finding ways to break free and fight back, and in Europe, politicians like Pitt and Wilberforce are working to abolish the slave trade and give people of all classes the right to use their gifts. Desmoulins and Robespierre start out fighting for freedom, but as the French Revolution descends into pure violence, it becomes clear that someone is manipulating Robespierre to cause as much death as possible. The story leans too heavily on dialogue, which, unfortunately, is not Parry’s strongest suit. Her real talent lies in immersive worldbuilding and meticulous plotting, and she does an expert job of setting the scene for the rest of the series while simultaneously constructing a story that’s engaging in its own right.

An impressive beginning to what looks to be an ambitious series.