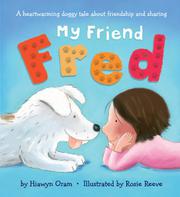 A young girl shares a special bond with Fred, her family's pooch.

When Grace’s older sister Sarah has friends over, they want to play with the dog. But Grace insists the dog belongs to her. After all, Fred's sniffing locates Grace's backpack when it's buried in a mess; he lounges in her bean-bag chair and wakes her with a nudge of a ball. She attempts doggy extortion to distract him with make-believe and stories (“Let's look at these for hours and hours until all Sarah's friends go home”), but Fred whimpers at the door. Grace has an epiphany that leads to a dramatic change of heart. Although this shift is praiseworthy and one that many parents will encourage, it is out of sync with Grace's developmentally realistic attitude that preceded it. Her final, private thoughts belie her transformation, though: “I know ‘ours’ is only a word and whatever anyone says, really that dog will always mostly be… / my friend Fred.” Fred and Grace's relationship is endearingly described in Reeve's pastel-hued illustrations. Appropriately, they are by far the most developed characters, aptly reflecting Grace's self-centeredness.

It's a doggone shame that didacticism mars the depiction of a young owner's relationship with her beloved pup.