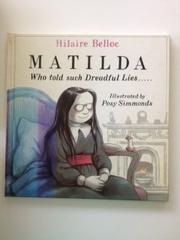 Who Told Lies, and Was Burned to Death

A gruesome tale that originally appeared in Cautionary Verses (1941)—a seriocomic fable along the lines of ``The Boy Who Cried Wolf''; the humor is in Belloc's spritely cadence and his preposterous exaggeration. Simmonds, a gifted satirist, sets the tale in pompous Victorian London, with Matilda as a mischievous Charles Addams figure, the illustrations' predominating blacks and grays contrasting with her red-rimmed eyes and the lurid flames that consume her when the fire brigade refuses to come. Skillfully varying vignettes, multiple frames, and dramatic double spreads, Simmonds reflects both the humor and the grim lesson, though the fearsome cautionary aspect weighs more heavily in her concluding pictures. Some readers may prefer to leave Matilda's demise to the imagination or to stick with Kellogg's witty interpretation in pen and ink (1970, to be reissued in May); still, Simmonds's graphic representation is full of verve, handsomely produced, and entirely in the spirit of the original. (Poetry/Picture book. 5-9)