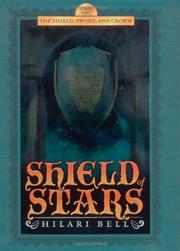 The Shield, Sword, and Crown, Book One

Bell opens a new series with an enjoyable tale of 14-year-old Weasel, formerly a criminal, trying to save his mentor from hanging. Years ago, Justice Holis caught Weasel picking his pocket but chose not to prosecute. When Holis is arrested for instigating a peaceful revolt of nobles against the country’s corrupt regent, Weasel’s arrested too, but luckily gets imprisoned in an escapable cell rather than the castle dungeon. He and cellmate Arisa, a stranger his own age, break out and leave the city. They seek the Hidden, people who practice an outlawed religion, and the Falcon, a murderous bandit with enough men, Weasel hopes, for a prison breakout. Arisa wants a revolution for justice while amoral Weasel cares only for Holis. Arisa’s tarot cards tell her things; Weasel is skeptical of them and of the supposed “earth magic” that will strengthen any king who can find a lost sword and shield. The closure is chaotic and slightly random, but Bell provides satisfying surprises and suspense along the way. (Fantasy. 9-11)