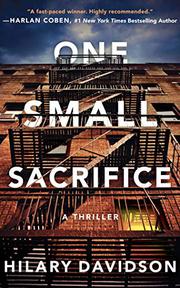 A capable but jaded NYPD detective questions whether a dangerous killer is picking off his romantic partners one by one—or whether someone else is getting away with murder.

When Alex Traynor’s fiancee, Emily, goes missing, Detective Sheryn Sterling feels partly responsible. After all, when another woman connected to Alex died the previous year after falling off a roof, she was sure he was guilty—but she could never find enough evidence to put him away. Alex might be an award-winning photojournalist, but his years spent bearing witness to the horrors of war have given him PTSD, and Sheryn knows from personal experience that this demon can make rational people do terrible, violent things. As the investigation into Emily’s disappearance deepens, Sheryn and her new partner find themselves going back over the previous case as well. It’s possible that there’s a darker story there and that Alex isn’t the only one with secrets. The novel changes third-person perspectives in each chapter, giving insight and development to a handful of different characters, which allows for several characters to become multifaceted throughout the novel. There is an immediate relevance to Alex’s struggles with PTSD as well as to Sheryn’s concern that her beloved former (retired) partner’s casual bigotry might have had some effect on how they approached their job. An additional plot thread involving both opioid addiction and illegal prescriptions also rings sadly current. Overall, Davidson's (Blood Always Tells, 2014, etc.) plot doesn’t offer anything groundbreakingly new or unfamiliar, but it’s easy to get drawn deeply into the various motives and secrets of each character because it’s so perfectly human for all of us to keep things hidden, even from those we love.

A thoughtfully plotted and skillfully characterized procedural mystery—and, it appears, the first in a new series.