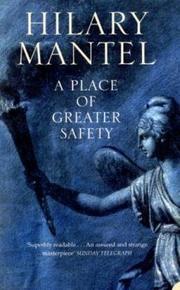 A PLACE OF GREATER SAFETY

British novelist Mantel weighs in with her American debut: a massively impressive, painstakingly detailed saga of the French Revolution as its leaders lived it. Citizens Danton, Desmoulins, and Robespierre are the primary figures in this historical epic, as each moves from provincial beginnings to Paris and a larger-than-life status in the heady days of revolutionary fervor and terrible excess. Lawyers all, their inclinations and positions allow them to step into roles for which they are well-suited: Danton as the manly, vainglorious hero, as committed and bold as he is self-interested; Robespierre as the tireless conscience of the Revolution, reluctant to accept the power thrust upon him but with an ascetic temperament that brooks no compromises with lesser mortals when he does; and Desmoulins, the go-between, flamboyant and inflammatory, devoted to his friends and sexually ambivalent. Each man moves to his separate but equal destiny through a rich field of characters and images, with wives and family members, sans-culottes and royalty, friends and supporters all revealed in telling detail. The intricacies of political maneuvering in a time of social upheaval are handled with sensitivity and wonderful dexterity, with the final crack in the revolutionary facade that brought Robespierre to turn his allies over to the executioners—in effect destroying all they had struggled together to build—being evident long before it becomes visible. Re-creating the fullness of history with its wealth of human faces and failings, this is a lively, engrossing tale of power, glory, and despair.