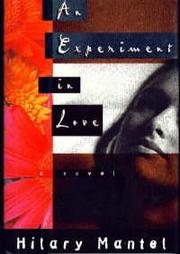 AN EXPERIMENT IN LOVE

An angry novel by Mantel (A Place of Greater Safety, 1993, etc.), offers a powerful, but incomplete, portrait of a young woman driving herself toward destruction. Narrator Carmel McBain traces her crabbed, anxious life from childhood in Lancashire up to college in London in the 1960's. Her parents are Irish immigrants, her father affable and distant, her mother furious, accusatory, manipulative. She relentlessly prods her daughter to succeed, and Carmel, intelligent and pliable, does: She wins a place in a posh convent school and eventually a scholarship to London. Meanwhile, Katrina, the stolid, bright, cruel daughter of a neighbor, shadows Carmel's life, always competing with her, following her first to the convent school and then to London. And Julia, Carmel's friend and roommate at the university, is elegant, insouciant, at 18 already juggling a series of well-heeled boyfriends. Mantel's portrait of these girls, and more generally of the lives of young women in the unsettled `60's, is sharp and convincing: Their brittle, witty talk, their struggle to fight for true careers, their difficulty navigating a new world of sexual possibilities, are all rendered here in vivid detail. And the self-hating Carmel's quiet descent into anorexia is traced with almost clinical exactitude. There's a much-foreshadowed climactic scene in which Carmel's dormitory burns down and Lysette, Katrina's roommate, dies. (Carmel suspects that the ever-envious and angry Katrina locked her in their room before fleeing.) Then, rather bafflingly, there's a perfunctory final chapter in which a much- older Carmel, cured of her anorexia and married, looks back on these events. We never learn how she came to grips with her furies, though, or even what has happened to the loathsome Katrina. It may be that Mantel wants to suggest that such things don't matter because so little has changed: Women are still without much true authority. Still, without some conclusive image, we're left guessing about the greater meanings behind this grim, profoundly moving work.