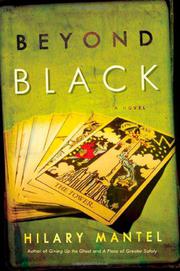 Unpleasant and meddling dead people litter the landscape around a very sweet medium whose past would frighten anyone to death.

The mark of a great novelist may be the ability to take you where you truly don’t want to go. If so, Mantel (Giving Up the Ghost: A Memoir, 2003; Fludd, 2000, etc.) is the real goods. Who, without some sort of artistic seduction, would willingly go into the mind of an obese English psychic whose tortured childhood makes the worst of Dickens look like a cakewalk? Mantel’s lure into this dark trip is the carefully won charm of psychic Alison “Al” Hart, a sunny-tempered “sensitive” who has had to tolerate the constant presence underfoot of Morris, her repulsive spirit guide. Morris, who is linked to Al’s evil childhood surroundings, hangs around her dressing room, invisible to the “insensitive” as Alison works the crummy theaters and meeting halls where she and her colleagues bring whitewashed glimpses of the postmortem other side (nobody wnts to hear how confused and unhappy the dead really are) to England’s lower middle classes. In the years since the appearance of the Hale-Bopp comet brought unimagined looniness onto the world scene, Al has benefited from the no-nonsense assistance of Colette, an erstwhile events manager in flight from a loveless marriage. Colette’s keen business sense has put Al’s finances in such order that there is enough money for the odd couple to buy the largest model of house in a new subdivision that is so devoid of charm or past that Morris, very much a city lad when he was alive, finally leaves the two women alone for a period of peace. Relative peace. Alison is never without reminders of not just her special abilities but of the incidents in her childhood that scarred her brutally, inside and out. Voices of the dead turn up on Al’s taped memoirs, and then her old torturers turn up in the subdivision, following orders from Lucifer.