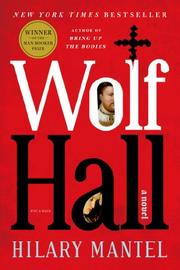 Versatile British novelist Mantel (Giving Up the Ghost, 2006, etc.) forays into the saturated field of Tudor historicals to cover eight years (1527–35) of Henry’s long, tumultuous reign. They’re chronicled from the point of view of consummate courtier Thomas Cromwell, whose commentary on the doings of his irascible and inwardly tormented king is impressionistic, idiosyncratic and self-interested. The son of a cruel blacksmith, Cromwell fled his father’s beatings to become a soldier of fortune in France and Italy, later a cloth trader and banker. He begins his political career as secretary to Cardinal Wolsey, Lord Chancellor of England. Having failed to secure the Pope’s permission for Henry to divorce Queen Katherine, Wolsey falls out of favor with the monarch and is supplanted by Sir Thomas More, portrayed here as a domestic tyrant and enthusiastic torturer of Protestants. Unemployed, Cromwell is soon advising Henry himself and acting as confidante to Anne Boleyn and her sister Mary, former mistress of both Henry and King Francis I of France. When plague takes his wife and children, Cromwell creates a new family by taking in his late siblings’ children and mentoring impoverished young men who remind him of his low-born, youthful self. The religious issues of the day swirl around the events at court, including the rise of Luther and the burgeoning movement to translate the Bible into vernacular languages. Anne is cast in an unsympathetic light as a petulant, calculating temptress who withholds her favors until Henry is willing to make her queen. Although Mantel’s language is original, evocative and at times wittily anachronistic, this minute exegesis of a relatively brief, albeit momentous, period in English history occasionally grows tedious. The characters, including Cromwell, remain unknowable, their emotions closely guarded; this works well for court intrigues, less so for fiction.

Masterfully written and researched but likely to appeal mainly to devotees of all things Tudor.