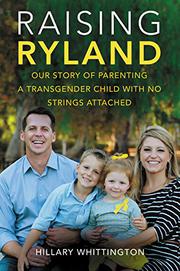 Our Story of Parenting a Transgender Child with No Strings Attached

by Hillary Whittington with Kristine Gasbarre

A new family must regroup after their toddler exhibits gender ambivalence.

Whittington, a mother of two, poignantly chronicles the transformative journey of Ryland, her young son who was born female. On his first birthday, the author’s son was diagnosed as deaf. A year later, the child received cochlear implants to enable hearing and speech capability. Then, after expressing tomboy inclinations and masculine bathroom traits, he tearfully announced, “I’m a boy.” Initially distressed, the family viewed the issue as much more than just a toddler phase and slowly began adapting to the fact that their daughter truly identified as a boy in every way. When their second daughter, Brynley, was born, they came to terms with their transgendered son. Both the author and her husband struggled with the critical next steps in Ryland’s upbringing, his gender identity, and childhood development, while their greatest “fears came from how the world would view our child.” The road was arduous, yet it began with a simple haircut and proper pronoun use. Amid the years of “private turmoil” and Ryland’s many expected (and unexpected) challenges with school and societal rejection, the Whittingtons proactively educated themselves, posted videos online, and emerged as a consistently supportive and nurturing unit. Sensitively handled and written in breezy prose that doesn’t linger too long on the expository details of their ordeal, the author sets a fine example for other parents either imagining or personally experiencing a similar situation. Believing their joint understanding and acceptance of Ryland will result in a blissful childhood, the Whittingtons have truly afforded their son the opportunity to “grow up with the chance to cultivate the same self-love and confidence to which every child has the right when he or she is born.”

An uplifting testimonial to the power of unconditional familial love and acceptance.