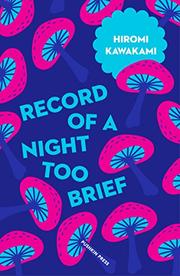 RECORD OF A NIGHT TOO BRIEF

Kawakami, winner of the Akutagawa Prize, delivers three evocative tales that, as if from the notebooks of Kafka, concern strange transformations that happen to perfectly ordinary people going about their lives. In the title story, the narrator feels an itch—and then is suddenly galloping down the streets and amazing the onlookers. “That’s a sight you don’t see every day,” says one, and when the poor changeling tries to respond “Get the fuck outta here,” it becomes apparent that, yes, our narrator, gender uncertain and in any event provisional, has turned into a horse. It’s the first of many transformations in a dream that turns to horror, with talking dolls, shriekingly accusatory macaques, and ranting kiwis. In a closing moment, while the landscape is being scraped clean to make a town, the narrator has become a tree, and more: “Then I grew old, very old, and rotted away.” The narrator’s lot is no better or worse than those of the characters in the succeeding stories. “Missing” is an enigmatic fable in which people and huge porcelain vases alike go disappearing in the night, while those left on this plane say bizarre things: “My love for you,” says a matter-of-fact bridegroom (by proxy, as it happens), “is wider even than the floor area of the largest apartment in this apartment complex.” The narrator of the closing story, meanwhile, might want a similarly large space in which to hide in a world where everyone and everything, it seems, is a snake in disguise—including, in the end, that very narrator, a young woman who lies in the darkness “experiencing in equal parts a sense of dread and a sense of calm expectation, the tears falling, as the night continued to deepen.”

Kawakami marks the literary map of Japan with a warning that beyond here lie dragons—or snakes and ghosts, at any rate. Astonishing, strange, and wonderful.