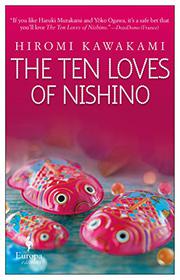 THE TEN LOVES OF NISHINO

Kawakami (Record of a Night Too Brief, 2017, etc.) explores desire and the elusive nature of love through the voices of 10 women who all loved the same man, Nishino Yukihiko, at different points in their lives and his.

The title character remains a cipher, but the women who memorialize him are vividly rendered individuals and together form a lively spectrum of female desire. In 10 chapters from 10 different characters' points of view, the women remember aspects of Nishino's life, from the return of his ghost to his awkward adolescence to his womanizing days from his 20s to late middle age. It's unclear exactly what Nishino looks like or even does for a living—some kind of white-collar work for a company. But in a sly turn by Kawakami, the somewhat feckless Nishino is mostly a catalyst for the women to explore their own feelings of sensuality and sexuality. The women in this collection are vibrant, lusty, and clearly the agents of their own love lives. For example, Natsumi, who carried on an affair with Nishino while married to another man, decides, "I may not have liked him, but I was in love with Nishino" and remembers fondly the odd way he pronounced "parfait." Manami, a businesswoman, declares proudly that Nishino was three years younger and her subordinate at work when she embarked on an affair with him. When she breaks up with him, he asks her to marry him, but she walks away. Kawakami is the winner of multiple awards in her native Japan, including the Akutagawa and Women Writers (Joryu Bungako Sho) prizes.

Kawakami's novel treats its feminist themes with a light hand but still slyly lands its points.