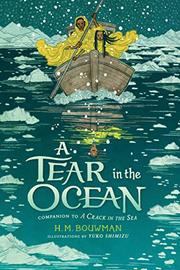 A TEAR IN THE OCEAN

In the companion to A Crack in the Sea (2017), Bouwman offers stories of loss, hope, perseverance, and the repercussions of severed platonic and familial bonds.

In the book’s present day of 1949 in the “second world,” 12-year-old Putnam, son of the king of Raftworld, is impatient with his father’s refusal to take action to correct the mysterious salinization of their water, so he leaves home to do it himself. Meanwhile, Islander Artie, also 12, flees an abusive home that’s become even worse since her mother’s death. They do not intend to journey together, but a twist of fate finds them both stealing the same boat. In a separate storyline, a century earlier, 14-year-old Rayel, daughter of the then-king of Raftworld, runs away to escape an arranged marriage. These flights lead to unexpected happenings: Putnam and Artie’s friendship and Rayel’s discovery of magic within herself and unlikely friends. They also bring great trials, from physical privation to the looming feelings that nefarious presences watch and follow. Though their voyages begin at different times, all three unknowingly take the same route toward the cold southern part of their world and are eventually connected, leading to truths and revelations. Bouwman masterfully infuses old fairy tales and legends into her alternate-universe adventure, meticulously weaving times and storylines into a riveting plot. All three protagonists have brown skin. Shimizu’s energetic black-and-white illustrations add visual drama.

A novel that will have readers reflecting on their own experiences of grief, longing, regret, survival, and overcoming.