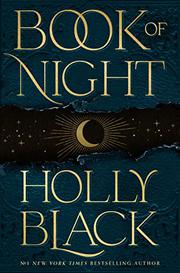 A former thief who specialized in stealing magical documents is forced back into her old habits in Black's adult debut.

Charlie Hall used to work as a thief, stealing for and from magicians—or rather, “gloamists.” In this world, gloamists are people with magical shadows that are alive, gaining strength from the gloamists' own blood. A gloamist can learn to manipulate the magic of their shadow, doing everything from changing how it looks to using it to steal, possess a person, or even murder. Gloamists hire nonmagical people like Charlie to steal precious and rare magical documents written by their kind throughout history and detailing their research and experiments in shadow magic. Gloamists can use onyx to keep each other from sending shadows to steal these treasures, but onyx won't stop regular humans from old-fashioned breaking and entering. After Charlie’s talent for crime gets her into too much trouble, she swears off her old career and tries to settle down with her sensible boyfriend, Vince—but when she finds a dead man in an alley and notices that even his shadow has been ripped to pieces, she can’t help trying to figure out who he was and why he met such a gruesome end. Before she knows it, Charlie is forced back into a life of lies and danger, using her skills as a thief to find a book that could unleash the full and terrifying power of the shadow world. Black is a veteran fantasy writer, which shows in the opening pages as she neatly and easily guides the reader through the engrossing world of gloamists, magical shadows, and Charlie’s brand of criminality. There's a lot of flipping back and forth between the past and the present, and though both timelines are well plotted and suspenseful, the story leans a touch too hard on the flashbacks. Still, the mystery elements are well executed, as is Charlie’s characterization, and the big twist at the end packs a satisfying punch.

Hits the marks for spooky thrills and mysterious chills.