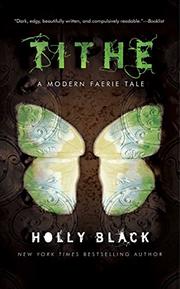 Debauchery, despair, deceit, and grisly death—what more could you ask from a fairy tale? Sixteen-year-old Kaye has always felt like a freak; partly because she’s spent half her life in seedy bars while her mother vainly pursued rock-star fame, but also from her memories of childhood fairy companions. Still, she’s not prepared for what happens after she rescues Roiben, the gravely wounded and impossibly gorgeous elven knight. Her friendly sprites return to warn her that Roiben serves the Unseelie Court, the darker aspect of Faerie, and that she has been designated the mortal sacrifice in the ritual Tithe that binds the independent fey to their cruel and depraved rule. But what if that sacrifice weren’t . . . quite . . . mortal? Black’s stunning debut cleverly twists the Tam Lin tale. Though Kaye’s home life seems almost comically sordid, when the action moves to the various Faerie Courts and their allies, their intrigues make an intricate tapestry, woven of dark threads of obsession, degradation, and horror, yet graced with bewitching beauty and a surprisingly tender romance. Once she drops her angst-ridden attitude, Kaye is a clever, courageous heroine with an appealingly wry voice, and Roiben is a gloriously damaged and darkly noble tragic hero. While most of the supporting cast has little to do beyond playing villains or victims, Black has an eye for the telling detail that brings the most minor character to life. A labyrinthine plot with Goth sensibility makes this a luscious treat for fans of urban fantasy and romantic horror. (Fiction. YA)