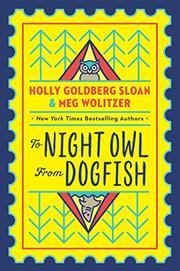 TO NIGHT OWL FROM DOGFISH

The Parent Trap gets a modern makeover in this entertaining and endearing middle-grade novel about two 12-year-old girls, one camp, and a summer that will bond them for a lifetime.

Avery, an aspiring writer from New York, and Bett, a California surfer girl, are the lights of their respective single father’s lives—and each is very much used to it. So the news that their gay dads fell in love at a conference and have been secretly dating for three months does not sit well with either of them. Worse still, the girls are bundled off to a nerd camp where they are expected to bond like family while their dads head off on an eight-week motorcycle adventure in China. Sloan and Wolizter make strategic use of their tale’s epistolary (or rather email) format to create two disparate yet familiar-feeling three-dimensional characters who are from very different worlds. That they will eventually become sisters feels inevitable, but that does not diminish the enjoyment of watching Avery and Bett bond over animals at camp, gradually growing toward each other and then with each other. Their increasing closeness is tracked in the evolution of their correspondence, which becomes littered with nicknames and discussions of everything from periods and pet phobias to boys. Bett is African-American and was carried by a Brazilian surrogate, and Avery has both white and Jewish heritages.

A sweet and amusing tale that celebrates diversity while reinforcing the power of love and the importance of family.