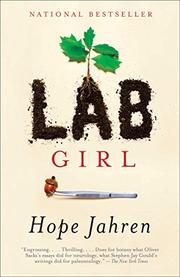 Award-winning scientist Jahren (Geology and Geophysics/Univ. of Hawaii) delivers a personal memoir and a paean to the natural world.

The author’s father was a physics and earth science teacher who encouraged her play in the laboratory, and her mother was a student of English literature who nurtured her love of reading. Both of these early influences engrossingly combine in this adroit story of a dedication to science. Jahren’s journey from struggling student to struggling scientist has the narrative tension of a novel and characters she imbues with real depth. The heroes in this tale are the plants that the author studies, and throughout, she employs her facility with words to engage her readers. We learn much along the way—e.g., how the willow tree clones itself, the courage of a seed’s first root, the symbiotic relationship between trees and fungi, and the airborne signals used by trees in their ongoing war against insects. Trees are of key interest to Jahren, and at times she waxes poetic: “Each beginning is the end of a waiting. We are each given exactly one chance to be. Each of us is both impossible and inevitable. Every replete tree was first a seed that waited.” The author draws many parallels between her subjects and herself. This is her story, after all, and we are engaged beyond expectation as she relates her struggle in building and running laboratory after laboratory at the universities that have employed her. Present throughout is her lab partner, a disaffected genius named Bill, whom she recruited when she was a graduate student at Berkeley and with whom she’s worked ever since. The author’s tenacity, hope, and gratitude are all evident as she and Bill chase the sweetness of discovery in the face of the harsh economic realities of the research scientist.

Jahren transcends both memoir and science writing in this literary fusion of both genres.