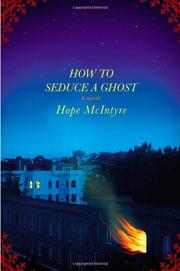 HOW TO SEDUCE A GHOST

Chick-lit comes to the mystery field.

Nathalie (Lee) Bartholomew is on the outs with her bossy mum, her docile BBC engineer boyfriend Tommy and her best friend Cath. Moaning, groaning and taking her emotional temperature every few minutes, Lee keeps herself busy imagining that he’s about to die in an arson fire, just like her Notting Hill Gate neighbor Astrid McKenzie. When her literary agent lands her a plum assignment writing soap star Selma Walker’s autobiography, Lee has one more interpersonal problem to deal with: The man she thought was Selma’s manager turns out to be her husband too, and Lee and Buzz have been heating up the mattresses. Worse, Selma confides that she’s passionately in love with Buzz, even though he beats her up regularly and probably treated Astrid, his former love, the same way. Detectives Austin and Cross scour the neighborhood for clues and suspects in Astrid’s death, then go into investigative overdrive when Lee finds her house in flames and a dead body in the adjoining summerhouse. Through it all, Lee and Selma dither over the dangerous Buzz, making excuses for him, until another fire elevates him to hero status.

Lee’s passion for deteriorating relationships, emotional and physical problems, and nerds tossed in with hunky guys quickly grows tiresome, and the whodunit elements pass as quickly as the many one-night stands.