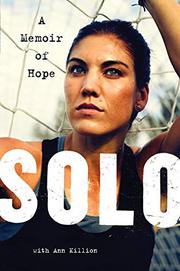 A Memoir of Hope

by Hope Solo with Ann Killion

The unflinching account of U.S. women's soccer team member Solo's life on and off the field.

Born in Richland, Wash., a plutonium-producing town "created in the dark shadows of the American dream," Solo came from a family that "[didn't] do happy endings.” Her father was a philandering con man who married her mother while still serving a prison sentence for embezzlement. When Solo was 7, he kidnapped her and her brother Marcus from their mother; after he was arrested, she did not see him again for many years. But the damage had already been done. Her home life was fraught with tension that manifested as fights between Solo and her brother and alcoholism in her mother. She found refuge in sports and excelled as a soccer player. By the time she was a high school junior, she had caught the eye of college coaches across the country. Solo chose the University of Washington, where she lived a double life as a respected college athlete and a national soccer team member while gradually rebuilding a relationship with her now-homeless father. Dreaming of World Cup glory, Solo then played for professional teams in the U.S., Sweden and France while continuing to train with the American national team. Never one to hold back, she speaks with great honesty about the difficulty of living in the shadow of the 1999 World Cup championship team. She also reflects thoughtfully on her infamous benching at the 2007 World Cup competition and how the misunderstanding it caused nearly ruined her reputation and professional standing. Through heartache, setbacks and career-threatening injuries, Solo demonstrates not only a fierce determination to overcome, but also the grace of a true champion.

A readable, inspiring memoir about staying true to dreams and principles in a world that too often forces personal compromise.