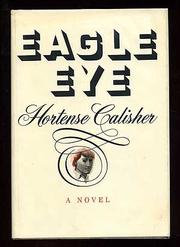 "If I once had a knife with thirty-nine uses, I ought to be able to remember how many ways people can be lost." Or for that matter how many styles Miss Calisher has achieved through the years. This, like Queenie, is about another contemporary youngster but by no means as arrantly campy — indeed its central problem endows it with a certain gentle, triste quality. Lostest of the lost is Bunty Bronstein, a summer soldier, who comes home from Europe on his 21st birthday thinking he knows where he's going — architecture and Yale. But after a party at his parents' house, he realizes he's been very out of touch with them — particularly with what they've become -the very rich father who's been using money as a "way of possessing people" and his Irish mother who's let her hair turn grey — just a still, empty shell of her former self. Or maybe it's really himself he's looking for — in a bar here, a church there. In the beginning and for a good part of this Miss Calisher, always a mannered writer, drops those crepitant, nervous half sentences ("In retrospect it seems a long time. Farce would have been so lovely. Of God") in her allusive and aggravating fashion but by the close Bunty, who is so symptomatic of any nice boy you might have known, may just connect. . . in spots.