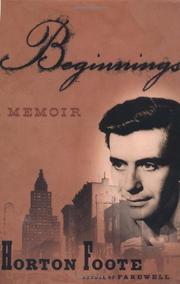 A wearisomely folksy account of a young actor’s apprenticeship in the 1930s.

Renowned playwright Foote takes up where Farewell (1999) left off, with his Depression-era departure from his hometown of Wharton, Texas, for a now-defunct acting school in Pasadena, California. He arrived in Pasadena a polite young rube and, judging by the aw-shucks narrative voice, left a polite young rube who could act. Considering that Dorothy Parker was then in her acerbic prime, it’s astounding that he could manage—particularly given a life in the theater—to have remained so untouched by irony or worldliness. Foote’s naïveté is initially endearing but eventually cloying. Given his distinguished career in the theater and the movies, he obviously has a fine and discriminating mind. Yet the performer who emerges in these pages shows no promise whatsoever. Nor does the more retrospective author allow himself any discriminating comments about the productions he watched or took part in, the theatrical training he enjoyed, or his own emotional development, if indeed it ever occurred. When he confides that Pauline Lord’s performance in Ethan Frome was the “most moving” that he ever saw, he never describes what so impressed him, but simply excerpts the New Republic’s review of the show. Meanwhile, Foote adds enough descriptions of friends and events presumably of great interest to the author (an entire chapter is devoted to his appendectomy) to make him a double for your most rambling uncle—for example, when he repeats nearly verbatim the story of a friend’s announcement that she is off to Germany only seven pages after already having mentioned it. The memoir cries out for a ruthless editor to help the octogenarian author give shape and meaning to his narrative.

Academics writing about Foote’s life and work will have to slog through these unselective, self-indulgent memoirs; other, luckier souls can just say no.