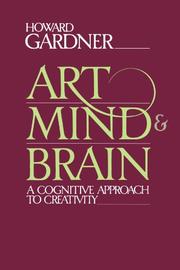 ART, MIND, AND BRAIN: A Cognitive Approach to Creativity

Old and new papers on artistic development by the Harvard psychologist--without the focus or fullness of Artful Scribbles (1980). Gardner speaks as a cognitive psychologist worshipful of past masters, but unsatisfied by the severe rationality the discipline has imposed on developmental studies. Some years ago, he joined with like-minded colleagues in Harvard Project Zero (because nothing was known), a program to study creativity--and the affective component involved--via research on children, brain-damaged individuals, and talented artists. The psychologists might begin a fairy tale, for example, leaving out all emotional or motivational statements, and ask a child to finish it. Or, they would query the meaning of metaphors, discovering that preschoolers often missed the emotional point: ""HIS heart was turned to stone"" meant just that. Much of the work is descriptive and tentative; numbers are limited, and cross-cultural or socioeconomic comparisons are lacking. Still, Gardner's conclusions seem sound, if hardly novel: between two and six, children enjoy an exploratory exuberance, creating handsome ""first drafts"" in all media; from learning the rules and needing to conform in school, a more proscribed literalness follows; in adolescenses, critical acumen is achieved. Gardner fears that many budding artists are lost in adolescent self-criticism, and he suggests preventive interventions--teach eight-or-nine-year-olds perspective, make use of creative computer toys or didactic museum shows (e.g., comparing originals and fakes). In later sections, he discusses his work with aphasic patients and other brain-damaged individuals, as well as current neuroscientific findings about right and left brain differences. He concludes with thoughts about adult creativity, speculating on the origin of Mozart's genius. A heterogeneous, erratic collection--with some stimulating pieces, others that repeat the obvious or don't go far enough.