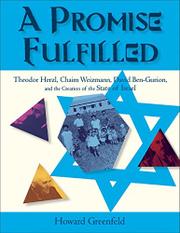 Theodore Herzl, Chaim Weizmann, David Ben-Gurion, and the Creation of the State of Israel

A history of the founding of the State of Israel through inspiring profiles of three of its most important founders. The aristocratic Viennese Theodore Herzl created the political movement of Zionism, lending an air of hopeful possibility to the centuries-old prayer of “next year in Jerusalem.” Chaim Weizmann, a brilliant scientist, took over the reigns of the movement when Herzl died, lending it an aspect of realpolitik. Ben-Gurion presided over the post-Holocaust creation of the state. Through the fascinating stories of these men’s lives, readers can follow the Jews’ return to their ancient homeland as it progressed from visionary dream to reality. Written in a no-nonsense, nuts-and-bolts style, this volume is best suited to those who have some grounding in Jewish history. (timeline, bibliography) (Nonfiction. 13+)