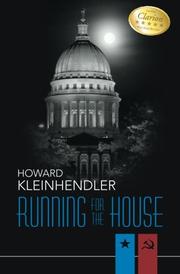 RUNNING FOR THE HOUSE

An aspiring congressman is unwittingly a pawn in a complicated game of political espionage.

Kleinhendler’s debut thriller is the story of Michael Gordon, a businessman who decides to enter politics in midlife and run for Congress. Unbeknownst to Gordon, however, the people encouraging him to run and managing his campaign are members of a secret cabal known only as “the committee.” A sort of black-ops unit loosely connected with the Drug Enforcement Administration, the committee contains some of the world’s top spies. Their goal is to create a deadly biological weapon to combat the Russian control of South American drug markets, and their hope is to install Gordon as a puppet in Congress to help further their agenda. Gordon goes blithely along with the plan, never really suspecting just how much he is being manipulated and what he has really gotten himself into. The seemingly unerring committee rarely stumbles. They are able to pull the strings of virtually every other character in the book, even infecting one person with cancer. Kleinhendler certainly skimps on the character development in favor of thrills and complicated schemes. This is especially true when it comes to his female characters—nearly all are impossibly beautiful, sexy, smart and good with a gun. The convoluted plot—full of spies and femmes fatales—gets ever knottier as it nears its climax, and it’s hard to remember who is out to kill whom. Yet, this novel seems to bask in all of its thrills, sex and violence, and it’s appealing for not pretending to be anything other than what it is. It could be tailor-made for a Hollywood summer blockbuster, one where the guns rule the action while the stars coolly say lines like, “That was quite a mess in Rio.” In a time when the scope of the National Security Agency remains a hot-button issue, and drug cartels continue to wreak havoc around the world, this novel taps into a kind of escapist cultural zeitgeist.

An entertaining, if shallow, thriller.