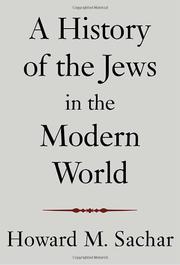 A HISTORY OF THE JEWS IN THE MODERN WORLD

An ambitious, thoroughly accessible account of the so often unhappy fortunes of the Jewish people from the early modern era to the present.

In the late 18th century, writes Sachar (History/George Washington Univ.; Dreamland, 2002, etc.), many of the states and principalities of Europe were faced with a difficult decision: their rulers and peoples may have despised the much-maligned Jews hidden away by night in their prisonlike ghettoes, but they needed their “talent for producing liquid wealth” if their economies were to enter the modern age. Religious fanaticism was becoming a thing of the past, which cooled some of the anti-Semitic ardor of both Catholic and Protestant realms, and in the next few years Jews became able to travel freely, live where they wished and even attend public schools and universities—all quite astonishing changes, given past repression. Among the results were the rapid growth of a Jewish middle class, the arrival into France and Germany of a large population of immigrants from Eastern Europe and the dispersal of Jews to the New World; in the last regard, Sachar notes that whereas the British crown imposed plenty of restrictions on Catholics, “not a single law was enacted in British North America specifically to penalize Jews.” Elsewhere that was not true, and by the end of the 1800s, Pope Leo XIII was publicly supporting “the anti-Semitic movement as long as it is carried out in a legal fashion, as in Germany.” Sachar charts these changing sentiments, offering exact and lucid précis of such transformative events as the Dreyfus Affair and the rise of organized, officially ordained anti-Semitism across Europe (and, in response, the rise of Zionism). Moving from continent to continent over time, Sachar brings his account to the post-9/11 world, with anti-Jewish sentiment again on the rise in Europe thanks not only to homegrown fascists but also to an ever-growing Muslim population, itself marginalized.

An essential work of modern history: put it alongside Irving Howe’s World of Our Fathers and Amos Elon’s more recent The Pity of It All.