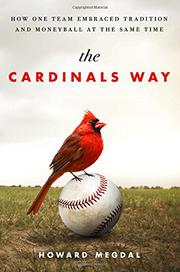 How One Team Embraced Tradition and Moneyball at the Same Time

Revealing look inside the locker room and front office of a storied baseball franchise.

What is the “Cardinals Way?” On one hand, writes seasoned sportswriter Megdal (Wilpon's Folly: The Story of a Man, His Fortune, and the New York Mets, 2011, etc.), it’s “a product of a hundred years of serendipity,” the result of the confluence of the ideas of numerous baseball pioneers and the realities of the playing field. On the other hand, it’s the outcome of a not-always-easy fit between the insistence on old-fashioned, people-based fundamentals and a devotion to metrics and analytics. Megdal digs deep into the business of how a player is picked. We can expect to see one, a young pitcher named Daniel Poncedeleon, in the 2016 season, and a fine choice he will be, capable of hurling hellacious heat and uttering menacing utterances like, “I like someone in there that wants to hit the ball so I can strike ’em out,” while also revealing himself to be a pretty nice guy. Having picked a player, the Cardinals coaches now have to groom and train, and therein lies a heavy program of enculturation. After grooming and training, they have to retain their best players, which means paying money, something skinflint owners don’t like to do but that does keep a player happy and loyal. Money pervades the game, always figuring in the calculus of who is signed and who is cut and, in the case of the Cardinals, involving “analytic firepower to confidently run an estimate for a player going forward.” By that calculus, writes the author, Poncedeleon carries an on-paper value of $1.75 million, cinched for a $5,000 signing bonus—not a bad deal at all and speaking to the shrewdness of the staff and the hunger of a kid eager to show his stuff on the field.

Megdal writes with the easy fluency of a Jim Bouton, delivering a book that’s of value to students of business as well as baseball fans.