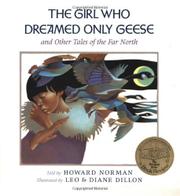 THE GIRL WHO DREAMED ONLY GEESE

and Other Tales of the Far North

This collection is not only the handsomest gathering of Inuit folktales ever, but one that will bring readers as close to a living oral tradition as printed material can. After working with folklorists and Inuit storytellers, Norman recasts ten stories from every corner of this widespread culture. While versions of several stories appeared in his Northern Tales (1990), they will be new to young readers. Most have a humorous cast: A shaman enrages a rude visitor with a succession of hilarious, earthy insults; stubborn Uteritsoq ignores good advice and has his "stomach guts" stolen by a moon spirit; when the Ark becomes locked in Hudson Bay ice, a crabby Noah refuses to have anything to do with the local villagers, and so is forced to eat many of his animals—plus a woolly mammoth that comes on board. Between each tale's two or three magical, formal, full-page paintings, the Dillons recapitulate events in a small black-and-white running frieze, composed of human and animal figures done in a style evocative of Inuit art. A pleasure to see, to hold, and to read—this is elegant bookmaking matched to entertaining, perceptive storytelling. Story notes appended. (Folklore. 9+)