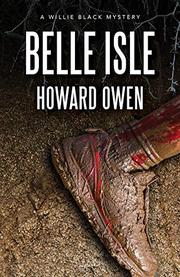 Richmond crime reporter Willie Black’s dying daily is granted at least a few more weeks of life by a grisly discovery well off the beaten path.

A pair of teens who assure the police that they were just enjoying the view of the James River from Belle Isle stumble over a severed leg still wearing a pricey athletic shoe. The shock of their discovery is magnified when the rest of the body, bashed to death, turns out to be that of Teddy “T-Bone” Delmonico, a local college football star from 50 years ago. Teddy never made much of a splash in the NFL, and his main claim to fame in recent years has been serving as the figurehead for DelFarr, an investment firm that bilked its investors out of some serious coin. No sooner has Mills Farrington, the brains behind DelFarr, emerged as a prime suspect than he removes himself from suspicion by getting fatally shot. That leaves mostly Teddy’s family—his first wife, Kathy Simmons, a realtor who’s moved on; his second wife, Felicia Delmonico, who’s busy running for Congress; and his truculent son, Brady, whose older brother died of a football injury years and years ago—to fill the void. The mystery, as Willie would be the first to admit, is an unholy mess. But Owen shines bright as ever in tracing the remorseless pressures on his journalist hero, who’s so hard-pressed in his quest to uncover the big picture by the rush to meet his daily deadlines for updates that he’s constantly in danger of missing the forest for the trees.

The big story here: the surprising kinship between the journalistic whodunit and the police procedural.