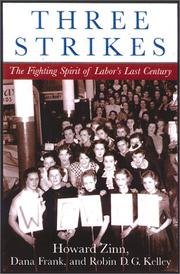 Top-drawer narrative histories of two important strikes, and a more amorphous consideration of musicians’ rights to their work, from three progressive historians.

Zinn (The Future of History, 1999, etc.) tackles the Colorado coal strike of 1913–14, during which 11 children and 2 women were found burned to death under tents set ablaze by National Guardsmen in a notorious incident known as the Ludlow Massacre. Zinn is a fine storyteller, keeping the tone low but passionate as he makes plain as day the many evils of John D. Rockefeller Jr.’s coal operation, a veritable fiefdom unto itself, keeping workers in its harness from cradle to grave. He also does a good job highlighting how the New York Times acted in collusion with the coal operators as part of a larger cultural air-brushing of dramatic and violent labor events into oblivion. Frank (American Studies/UC Santa Cruz; Buy American, 1999) displays a jazzier style as he recreates the Woolworth’s sit-down strike of 1937 in Detroit. (“Woolworth’s was a palace built for working-class people. The big fluted columns were made of concrete, not marble, then painted shiny bright colors.”) He too stands foursquare behind the strikers: young white women, poorly paid in dead-end jobs, caught in the revolving door of unskilled work. The radical Waiters’ and Waitresses’ Union of Detroit capitalized on the canny tactic of the sit-down strike, which kept owners from locking out workers and hiring scabs, and the women managed to subvert journalists’ preoccupation with their sex. Kelley (History/NYU; Race Rebels, 1994) tries to get a sense of musicians’ rights through the unsuccessful American Federation of Musicians strike against theater owners in 1936. The topic is unwieldy, as can be seen when looking at today’s controversies Napster and MP3, and Kelley’s broader question—voiced, not answered—is “what happens when working-class consumption of popular culture overrides the interests or concerns of popular culture workers?”

Important material out of the shadows to which so much labor history is exiled.