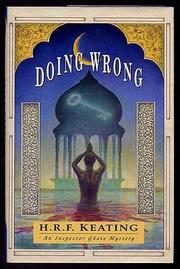 Inspector Ganesh Ghote has barely had time to clear off his desk since Cheating Death (p. 888) when he's called out on the strangling of Mrs. Shoba Popatkar, late Minister of Railways and sempiternal do-gooder. Stuck for leads, Ghote follows the slender trail of Mrs. Popatkar's recent railway ticket to the holy city of Banares: a 28-hour pilgrimage over his superior's protests leaves him in a place he knows nothing about, home to 2,000 temples and garrulous old Inspector Mishra, who seems to have an anecdote about every one of them. Staggering under the weight of the irrelevantly sacred, Ghote doesn't know that his every misstep is bringing him closer to the rabbity villain, H. K. Verma, aspiring Minister for Social Upliftment, who killed Mrs. Popatkar before she could expose the ancient apostasy his political idol Krishnan Kalgutkar confessed in his unpublished Recollections. Ghote can't imagine how he could ever find the murderer with so few clues, or even bring home the crime to Verma after he becomes convinced of his guilt; Verma sweats bullets over the very sight of his nemesis. The result is a deadlock of puny antagonists with impossible spiritual burdens. Like The Iciest Sin (1990) and The Rich Detective (1992), another fable about the morality of detection. This time, though, Keating cuts his comic take on Simenon a little fine, relying too much on mangled language—a political poster urges, ``Please To Vote for Communist Party (Marxist'')—and Inspector Ghote's ineffable charm. (Author tour)