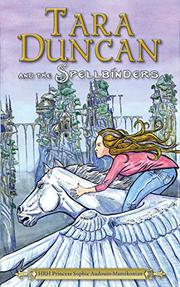 TARA DUNCAN AND THE SPELLBINDERS

When masked Bloodgrave wizards attack her grandmother’s mansion, 12-year-old Tara’tylanhnem (Tara) Duncan enters a world of magic—or, rather, many worlds, connected by Portals and inhabited by various fantasy races. No longer safe on Earth, Tara seeks refuge and an education in OtherWorld, at the Living Castle of Travia, under the tutelage of the dragon-wizard Chem (short for Chemnashaovirodaintrachivu). Tara accepts her new circumstances calmly—aided by frequent exposition dumps—even when she learns the truth about her parents’ disappearance and her grandmother’s severity. Endowed with boundless if unpredictable powers, but fearful of harming her family, Tara cautiously studies magic with a motley crew of students. In less than a month, she makes friends, garners inexplicably hostile enemies, travels and uncovers more of her heritage. Unfortunately, the swift resolution of an absurd parade of life-threatening situations lowers the suspense, and the protagonist feels more a product of wish-fulfillment than character development. Perhaps an effect of translation, the language is awkward—it seesaws between formal and colloquial, quaint phrases like “I'll be darned” and “Good grief” abound, and rhyming magical spells sometimes have an uneven meter. However, the author’s royal background (she is the crown princess of Armenia), her clear affection for high fantasy and her subtle sense of humor may keep readers engaged.

High fantasy for middle-schoolers who just can't get enough of it. (Fantasy. 10-14)

OH MY, OH NO!
by Lisa Charrier
Children

THE GATE OF DAYS
by Guillaume Prévost
Children

THE BOOK OF TIME
by Guillaume Prévost
Children

THE PROPHECY OF THE STONES
by Flavia Bujor
Children

YEAR OF THE GRIFFIN
by Diana Wynne Jones
Children