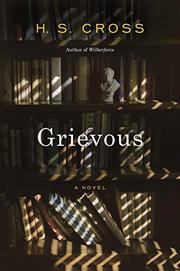 This is a sequel to the U.S. writer’s immersive debut about a British boarding school in the 1920s and shows her quirks and craft deployed to better effect

Five years after the upheaval depicted in Wilberforce (2015), life at St. Stephen’s Academy has returned to its version of normalcy. That is to say, its public school boys talk a strange slang while enduring bullying, caning, and countless other rituals: “What was to be worn when and how, who could be addressed and in what manner.” The story chronicles the period of March to December 1931, and it’s a busy tale that flits among a large cast linked by complicated ties of blood, friendship, or animosity. It demands attention and patience, with its argot and allusive style, its stretches of stream of consciousness. Grievous is the nickname of John Grieves, a brooding, gifted teacher deeply concerned with the well-being of academic prodigy Gray Riding. The roles of mentor, parent, and overseer in loco parentis provide much of the thematic meat. Grieves becomes enmeshed early on in disciplinary challenges when some boys are found in the off-grounds barn that featured in the first novel’s darker moments. The incident will lead to misery for Riding and estrange him from Grieves, although the latter’s intriguing goddaughter offers Riding the balm of first love. The teacher’s own first love provides an off-campus subplot as she travels around Europe seeking a cure for a mysterious illness. A stolen box of Riding’s may contain something incriminating about Wilberforce, now a golden-boy memory that pervades the Yorkshire school. An old friend tries to enlist Grieves in some prewar Smiley business at the Foreign Office. Will all this move from the playing fields of St. Stephen’s to the battlefields of WWII in further sequels?

Cross is a good writer who draws on a Kipling-esque nostalgia in her entertainingly peculiar picture of the public school as crucible for young male Brits.