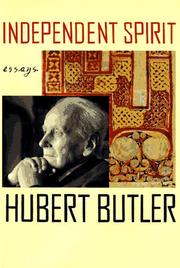 Posthumous but prescient historical, autobiographical, and literary essays from an Irish writer only now receiving his due. Uncategorizeable Butler (190191) was a passionate Irish nationalist but also a steadfast Anglo-Irish Protestant, a cosmopolitan who lived in Soviet Russia, pre-Anschluss Austria, and Yugoslavia and wrote with rare insight about these lands yet maintained that everything he wrote was ultimately about Ireland, a vigorous essayist, and a scholar with diverse interests in local history, provincial archaeology, literature, and politics. Butler's penetrating, determinedly nonideological essays on European politics and the complex relationship of Ireland and England earned him a reputation as a writer with an Orwellian political conscience and a Swiftian sense of indignation. But he also had a rare gift for communicating his enthusiasm for Irish history. In reminiscences and essays on his native Kilkenny County, he writes with vigor about the Protestant ``descendancy'' in Ireland following the Easter rebellion and the Irish civil war. Butler never excused his fellow Anglo-Irish for choosing exile in England or insular nostalgia rather than an active involvement in Irish affairs. Butler was deeply involved in Irish affairs, but his most difficult moments were caused by his exposure of the Zagreb Catholic archbishop Stepinac's complicity during WW II with the Croatian war criminal Pavelitch and his regime's bloody attempt to compel Greek Orthodox villagers to convert to the Roman Catholic faith. Butler's efforts to document his charges against a popular church figure, in a fervently Roman Catholic nation, caused a scandal that forced him into private life. Displaying lucidity, incisiveness, and uncompromising ethical sense, these essays demonstrate that Butler, whether he was writing about his own life, recent events, local history, or modern Irish writers, was above all, as Joseph Brodsky described him, a ``dishonesty hunter,'' determined to locate the truth and speak it, without fear or favor.