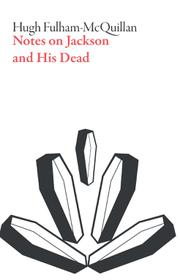 NOTES ON JACKSON AND HIS DEAD

Eighteen stories that flirt with both psychological horror and philosophical speculation through the unremitting setting of the ordinary life.

Fulham-McQuillan’s debut collection introduces the reader to a cast of hapless characters embroiled in situations that are increasingly difficult to define. In the title story, the speaker is a documentary filmmaker exalting in the singular opportunity to film Jackson, a former conductor beset by a sort of viral existentialism that results in all his past selves manifesting as corpses in the wake of his every movement. In “whiteroom” a man and his late wife have reduced their lives to the eternal simplicity of their pure white room in order to enter into a fraught immortality of the mind. In “A Tourist,” a man attracted by the memory of himself standing in a place before it fell to ruin “[visits] the grief of his past,” setting up camp in a desolate valley where he is haunted by a duo of shadowy others who attempt both communication and violence. To call these stories heady is an understatement of both their intent and form. Deeply influenced by continental philosophy (Kierkegaard is mentioned, Lacan is evoked, Simone Weil is quoted), the book also plays with the formal influence of Poe’s sensual grotesques, Dostoevsky’s tormented psychological realism, Borges' cerebral mythos. The results are ambitious and uneven. In “Winter Guests,” for example, the staff of a resort in the off-season report on the mounting tensions between a single guest and the beautiful female caretaker of a wheelchair-bound and totally bandaged patient. The story is haunting, suspenseful, and intricately detailed. Its philosophy lingers in the realization of its characters; its unanswerable questions rise organically from the setting of the winter seashore and the isolation of the nearly empty hotel. Other stories, however, are less successful and overwhelm the reader with their insistence on mingling Poe’s obsessive stylings with a more contemporary cynicism—or perhaps late-20th-century mass-produced weariness—reminiscent of Beckett or Georges-Olivier Châteaureynaud. These influences make for an uneasy pairing, one whose tremendous potential is sometimes buried beneath a miasmic stylistic expression.

An intriguing, if uneven, debut.