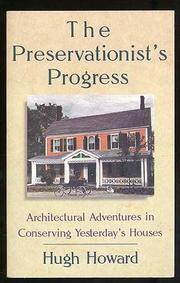 As much a book about old buildings as some of the men involved in saving them, here's a thoughtful journey through contemporary cultural conservation. Acknowledging the impossibility, and questioning even the desirability, of ever completely recapturing the past, Howard (How Old is This House?, 1989not reviewed) claims that the role of the preservationists he has profiled is rather to ``enable us to glimpse other times within the context of our own modern world. It is their insistence on the importance of the physical presence of the past, of its artifacts and its architecture, that preserves them.'' To make his case, then, he has assembled an eclectic group of buildings and preservationistsincluding architects, businessmen, art historians, and craftsmen like Donald Carpentier, who has lovingly assembled his own small restored village. In separate chapters, Howard profiles, among others, a preservation group in Essex, N.Y. that consults the community in making preservation decisions; the director of the curatorial department at Old Sturbridge Village; the architects restoring one of Thomas Jefferson's ``pavilions''; the founder of Old House Journal; a New Yorker who does research on buildings, especially in New York, for his clients; and an ongoing study of a problematical Frank Lloyd Wright house in Buffalo. An informative and accessible guide to the current status of preservation by someone who celebrates style and craftsmanship.