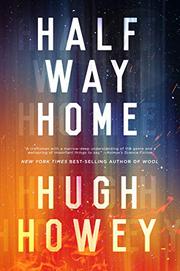 Revisiting a popular science-fiction premise—colonists stranded on an unexplored planet—the latest from Howey is a survival story revolving around a group of young pioneers who are awakened from their amniotic vats to find their settlement in ruins and the majority of their fellow colonists dead.

For hundreds of years, Porter and the rest of his compatriots have traveled through space as blastocysts—fertilized eggs—en route to a distant world that scientists back on Earth presumed could be habitable. Once at their destination, the AI was supposed to evaluate the planet and deem it either viable or unviable. If viable, the AI would grow the 500 fertilized eggs in vats and educate each one with specific knowledge (in medicine, mechanics, agriculture, etc.) for 30 years before they would be birthed as adults. If unviable, the AI would simply destroy everything. Born 15 years too early, Porter (the colony’s psychologist) is awakened to screams as his home burns. After deeming the world viable, the AI has inexplicably begun the abort process. Barely escaping with his life—naked and clueless about the alien world he has stepped into—Porter and 58 other newly hatched humans must survive long enough to understand the AI’s brutal decisions. But as the teenagers attempt to build their new society, age-old human flaws threaten to destroy their chances of survival. Howey doesn’t offer up anything particularly original here: The worldbuilding is superficial at best and the storyline is formulaic and predictable. But the major issue is with the tone-deaf characterization. Porter, who has been genetically engineered to be gay, is described as feminine and weak. His sexuality—which has little to do with the main story—seems forced and unrealistic. Some readers may find the paper-thin reasoning behind the author’s decision to make the main character gay problematic at best.

A fun but deeply flawed science-fiction reimagining of the 1955 Heinlein juvie classic Tunnel in the Sky.