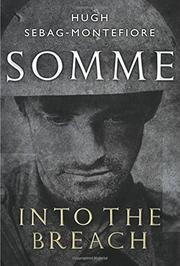 A painstaking chronological account of the hideously marred attack on the German entrenchments at the Somme, July-September 1916.

British journalist Sebag-Montefiore (Dunkirk: Fight to the Last Man, 2006, etc.) begins in medias res on July 1, 1916, the first of many British and French offensives to dislodge the German front along the river Somme in Belgium. The promised map (not seen) surely illustrates the armies’ slogs during those brutal weeks, when tens of thousands on both sides perished due to ill-informed leaders and for insignificant gains. The author vividly delineates the narrative via extracts from diaries and letters from soldiers. The long line of trenches had been held since the summer of 1914, after Germany’s invasion into Belgium was halted at the Marne by Anglo-French troops, and a stalemate had ensued. The plan for the Somme offensive had been underway since December 1915, but Sebag-Montefiore underscores its many flaws—e.g., inadequate artillery coverage and inability to cut through the German barbed wire at the right places, among other problems. Commanded by Gen. Sir Douglas Haig, the British Expeditionary Force at this point consisted mostly of inexperienced, inefficient volunteers. Moreover, in a kind of “gentleman’s agreement” between Haig and Gen. Henry Rawlinson, head of the British 4th Army unit selected for the Somme attack, Haig exerted what the author characterizes as an “unhealthy ascendancy” over Rawlinson, who had justifiable reservations about the attack, as did the British war committee. The author considers the bad weather and the capture of several British deserters who revealed to the Germans the extent and timing of the big push, thereby robbing the British of the element of surprise. Nevertheless, the overconfident officers assured their trusting soldiers, “we have destroyed the Germans with our guns. Now all you have to do is walk over to their trenches. There will be no opposition.” As the author shows, the results were shattering.

A beautifully crafted, blow-by-blow account with deep insight into the lives of these diverse young men.