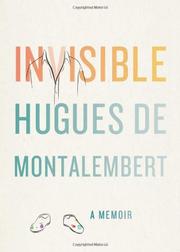 An impressionistic memoir by an artist whose lack of sight hasn’t diminished his lust for life.

In 1978, painter and filmmaker de Montalembert was attacked in his Manhattan home by a pair of burglars, one of whom threw paint thinner in his eyes and blinded him permanently. He recalled the assault and his recovery in Eclipse (1985), which became a bestseller in his native France. Invisible tells much the same story, but this slim book is styled more like a prose poem than a formal autobiography. Brief chapters alternate between the present and past tense, capturing both the author’s feelings of loss and fear in the days after the attack as well as his growing confidence in the years that followed. A lifelong world traveler, he slowly learned not just to navigate New York City streets but to catch planes to Indonesia, Greenland, India and other far-flung places, where he sought and occasionally found spiritual peace. De Montalembert is more hard-headed and down-to-earth than such earnest seeking might suggest. He bluntly states that “loss of sight is a mechanical accident, not a state of grace or an event fraught with spiritual consequences,” and he displays admirable candor and biting wit in discussing his clumsy first efforts to get around as a blind man, not to mention the romances that helped him during his recovery. However, specific events on his journey, including a trip to a Buddhist monastery in the Himalayas, cry out for a fuller treatment, and the closing chapters drift into airy platitudes about the pleasures of art and the need to resist self-pity. The book is not a feel-good story, but that doesn’t stop the author from lapsing into clichés about hope and the future.

De Montalembert deftly shows how his other senses came to the fore after he lost his sight, but his spiritual awakening feels unconvincing.