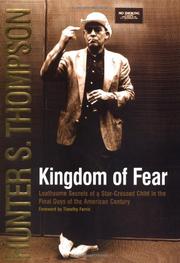 “Hell, I don’t miss those whispers, those soft groans of fear when I enter a civilized room,” Thompson writes in this collection of political and personal dispatches, attributing the mutterings to the failed understanding that he’s a teenage girl trapped in the body of a 65-year-old doper and career criminal. Maybe, but anybody might quail before someone whose day begins: “I finished my ham and eggs and knocked back some whiskey and picked up my Weatherby Mark V .300 Magnum and a ball of black Opium for dessert and went outside with a fierce kind of joy in my heart.” Thompson is too outrageous ever to grow stale, his storytelling too rockingly mad to ignore: “I had stopped for the moment beside the road to put out a newspaper fire in the backseat. . . .” Put it out with a can of beer, that is, while a mountain lion takes a leap at him from a cliff above. There are vengeful tangents, Old Testament fury, acts of retribution, accidents not waiting to happen but proceeding nonstop. And choice bons mots: “Texas is not the only state full of wealthy freaks with sinister agendas,” or the personally apt but nonetheless scary, “morality is temporary, wisdom is permanent.” The Thompson wisdom on political protest: “A Willingness to Argue, however violently, implies a faith of some basic kind in the antagonist.” On the invasion of Grenada: “low-risk, high-gain, cost-plus.” And more—the whole with enough bile to make a really big custard.

“I warped a few things,” says Thompson of his writing. When you’re a radioactive force field of one, what do you expect? Candent prose that still screws and buckles all it touches.