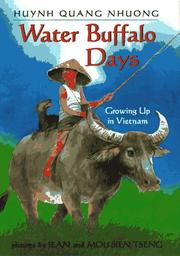 Growing Up in Vietnam

The village social life and customs in the central highlands of Vietnam prior to the involvement of the US provide an affecting platform for the author's warm memories of a childhood enriched by close relationships with the animals vital to the family's economic survival. Delicate pencil drawings accompany the first-person narrative that shows the role water buffaloes played during dry-season farming and rainy-season hunting. They were creatures of such importance that, when one named Water Jug dies of old age, it is only fitting that he is buried in the graveyard, ``as we had done for all the dead of our family.'' The boy hopes for a new bull with the same gentle temperament as Water Jug's, but his father has always dreamed of a replacement bull that would be not only a valuable worker, but a strong fighter and true leader when tigers, panthers, and lone wild hogs from the jungle threaten the village's herd. The father brings home a calf from a distant village, but delays naming him until his nature makes one apparent. After a fight in which he bests the reigning leader of the herd, the young bull is named Tank. Fierce in battle, Tank's gentleness otherwise earns him the respect of the village, and readers will come to admire him; his death, the result of ``a single misplaced bullet'' in a military skirmish, is very affecting. In Tank's passing, the author brings home the waste of war, in a book written from the heart. (Autobiography. 7-10)